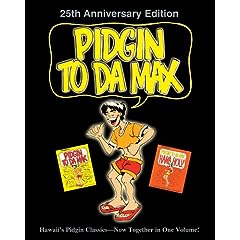 After you’ve been here a while, that exchange will make perfect sense.  It’s spoken in what’s locally called pidgin, which has a long history in Hawaii, and is still heard, though not as much as it used to be. But before we get into translations, let’s clarify something: it’s not really “Pidgin English.”

Linguists consider a pidgin to be an abbreviated form of a standard language, with a tiny vocabulary and a very regular grammar, neither of which changes much, over time.  A pidgin will also have been deliberately imposed, to enable speakers of different languages to conduct trade and other business.  The word “pidgin” itself was coined because it sounds a little like the English word “business.”

In the European colonies of Southeast Asia and the western Pacific, there is a true Pidgin English (also a Pidgin Dutch and a Pidgin French).  But that Pidgin English does not resemble Hawaii’s pidgin, because – as linguists insist – what’s spoken in Hawaii is actually a “creole.”.

A creole, they say, is a real language, which is fairly complex in both vocabulary and grammar; and although it may be rooted in one or more conventional languages, it’s continually evolving and expanding on its own.

In the 19th century, Pidgin English was introduced to Hawaii to enable communication between sugarcane field-hands and overseers from diverse backgrounds: Hawaii, Japan, China, the Portuguese Azores, etc.  But that early (true) pidgin quickly became a creole, as it absorbed vocabulary words and grammatical constructions from the workers’ own native languages, and especially as it became the first language of local children.

Until World War II, pidgin was the lingua franca (pun intended) of Hawaii’s people.  Everyone who’d grown up here, and quite a few newcomers and regular visitors, could understand it.  But it was always disdained by sophisticated people, and actively discouraged in schools.  Anyone who wanted a white-collar job had to be able to speak “regular” or “standard”
English.

But in the 1970s, when historically significant art and music styles were being revived, many local comedians began doing routines in pidgin; and local writers began creating skits, pageants and plays in pidgin.  They did this not only to keep the language from dying out, but to revel in its innate charm and colorful idiomatic expressions.

The dialog above can be rendered as follows, but I think you’ll agree that it loses something in translation:

Be forewarned: it’s not advisable to try speaking pidgin with strangers – you will probably “make A” (make an ass of yourself).  But there are several pidgin words and phrases that everybody in Hawaii does know and use – I’ll give you some, next time.

If you want a head start on that, go get the book called “Pidgin to da Max” – a humorous guide to this intriguing, enjoyable pid – oops! – creole language.